A downloadable piece of rubbish for Windows, macOS, and Linux

It's the year 2046. Many irresponsible actions on many powerful people's parts have led up to this point.

I've witnessed world superpowers crumble in days, even hours.
The human race was never meant to survive in peace as long as it has.
We were created to fight in solitude.
And it seems we've finally realised tha-

Last Scraps is an extremely simplistic and broken result of an attempt at creating a game from scratch within 48 hours for the LD Discord Jam #3.

The game's loosely themed  around the idea of being a lone survivor in a nuclear wasteland, building turret towers from scrap metal and powering them with radioactive power sources to protect yourself from the irradiated monsters lurking nearby.

You do that  by keeping the enemies away from the Core. Get through as many waves of enemies as possible by building turret towers and powering them sufficiently. 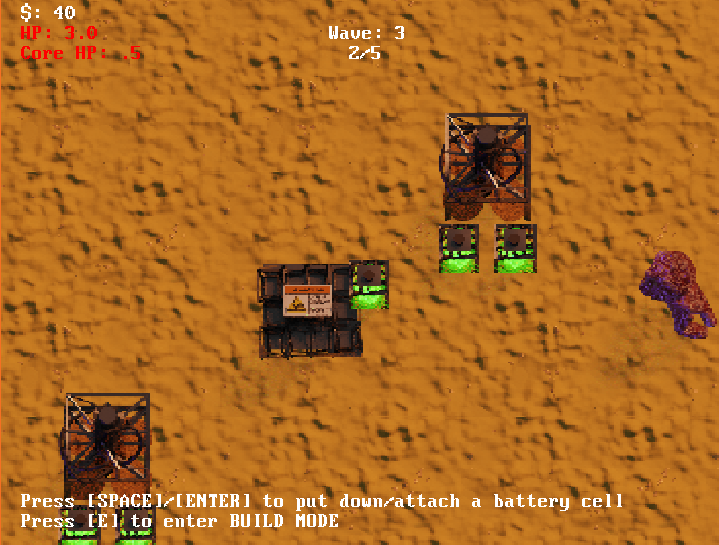 If the core is disturbed too many times and it's not being healed, you lose.

You, as the player, also have a set amount of health.

The gimmick with this game is you have to manage your power sources between your towers. You can overload the towers, which leads to increased damage and reloading speed, but it also indtroduces the risk of a tower  exploding.

This directly ties into the theme of distribution, since you have to distribute power between your turrets.

Move with WASD or arrow keys.

Walk over power cells to pick them up, press space or enter to drop.

Press E to enter/exit Build Mode. Use the number keys (0 through 5) to select an item to purchase, use left click (mouse button 0) to place an object.

To power a tower, place a cell directly on a tower/inside its wall. Due to some collision glitches, this might take a couple of tries.

There's no sound in the game at the moment. I only realised my AudioManager I programmed ahead of time was fundamentally flawed and I couldn't fix it during the jam, which is  a shame. I liked the aestheic I established graphically and was looking forward to expanding it with sound. Audio is hopefully coming in a post-jam release, if I ever make one.

WARNING: Core healing in the jam build is broken, don't use it. I'd fix it, but I can't due to jam rules.

If the window is too small for your screen, you can change the start resolution in the config.txt file in the res folder. Note that the game keeps the aspect ratio of 5:4, relative to the width.

This is a Java game. You need to have Java installed to run it. 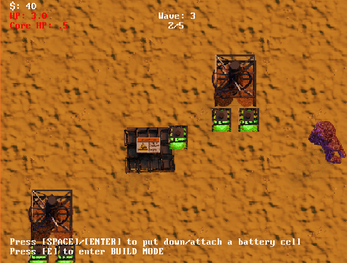 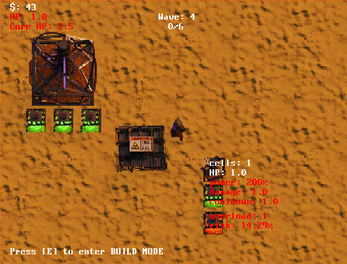